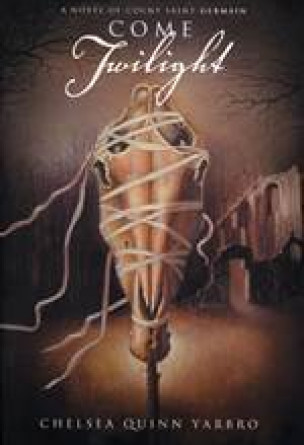 Beginning in the 600s, Spain's old blood rituals of animal sacrifice were replaced by the new gods of Christianity and Islam, who demanded no less obedience and allegiance. Saint-Germain becomes trapped in this cauldron of blood, fear, and faith when, he makes a vampire of the beautiful, haughty, tempestuous Csimenae.

Csimenae kills without mercy. She makes vampires without a second thought; and they,

For five hundred years, as waves of war and religion sweep over Spain, Csimenae hunts until her marauding, willful ways expose her vampiric nature. Saint-Germain's centuries of life have taught him that to fall out of step with history is to risk the True Death, a fate Saint-Germain wishes for none of his kind. He must try to save Csimenae-and her clan-but at what price?

A Feast In Exile

An Embarrassment of Riches

An Embarrassment of Riches

A Feast In Exile

In the Face of Death

A Flame in Byzantium