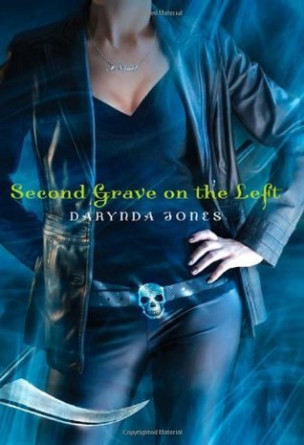 If you hang around with dead people, life can get pretty complicated. Take it from Charley Davidson, part-time private investigator and full-time Grim Reaper. Complicated is her middle name. The deceased find her very sparkly. Demons find her irresistible. And one entity in particular wants to seduce her in every way possible.
When Charley and Cookie (her best friend/receptionist) have to track down a missing woman, the case is not quite as open and shut as they anticipate. Cookie's friend Mimi disappeared five days earlier. Mimi then sends Cookie a cryptic message telling Cookie to meet her at an nearby coffee shop. The coffee is brewing, but Mimi's still missing. There is, however, a clue Mimi left on the bathroom wall: a woman's name. Mimi's husband explains to them that his wife had been acting strange since she found out an old high school friend had been murdered. The same woman whose name Mimi had scribbled on the bathroom wall.

Meanwhile, Reyes Alexander Farrow (otherwise known as the Son of Satan. Yes. Literally) has left his corporeal body and is haunting Charley. He's left his body because he's being tortured by demons who want to lure Charley closer. But Reyes can't let that happen. Because if the demons get to Charley, they'll have a portal to heaven...well, let's just say it wouldn't be pretty.

Can Charley handle hot nights with Reyes and even hotter days tracking down a missing woman? Can she keep those she loves out of harm's way? And is there enough coffee and chocolate in the world to fuel her as she does?

Here is your signpost for the most hilarious read of the year: Second Grave on the Left.

First Grave on the Right

For I Have Sinned

Fourth Grave Beneath My Feet

Fifth Grave Past the Light

Sixth Grave on the Edge

Seventh Grave and No Body

Brighter Than the Sun

The Dirt on Ninth Grave

The Curse of Tenth Grave

The Trouble with Twelfth Grave

The Trouble with Twelfth Grave

The Dirt on Ninth Grave

The Curse of Tenth Grave

Brighter Than the Sun

Sixth Grave on the Edge

Seventh Grave and No Body

Fifth Grave Past the Light

Death, and the Girl He Loves

Fourth Grave Beneath My Feet

Death and the Girl Next Door

For I Have Sinned

First Grave on the Right