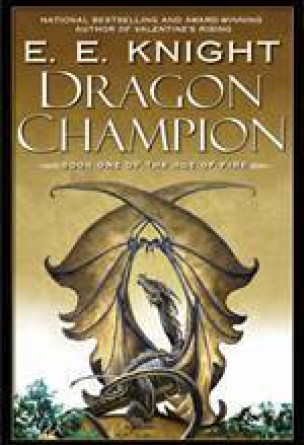 Dragon Champion, the first book in E. E. Knight's all-ages fantasy series chronicling the adventures of a fledgling dragon, is a dramatic departure for the author of the bestselling Vampire Earth saga (Valentine's Rising, Tale of the Thunderbolt, et al.) -- an adrenaline-fueled postapocalyptic blend of military science fiction and Lovecraftian horror that chronicles the ongoing war between soul-sucking alien invaders and the last few remaining pockets of human resistance.

Knight's fantasy debut concerns a rare, scaleless gray dragon named Auron. Born high in a mountain cave, he witnesses the slaughter of his parents at the hands of a band of dwarves and eventually matures into the last hope for the survival of his kind. Once above ground, Auron learns quickly just how dangerous it is to be a dragon. With dwarves, elves, and humans relentlessly hunting him, Auron finds friendship in the most unlikely of places -- but the young dragon's quest to find others of his kind may not lead him to the answers he hopes to find.

The good news is that Knight has penned a highly entertaining novel with profoundly moving themes that should appeal to fantasy fans of all ages, especially those with a penchant for dragon-powered story lines a la Anne McCaffrey's Pern and Mercedes Lackey's Dragon Jousters trilogy (Joust, Alta, and Sanctuary). The bad news is that those who have already read Knight's brilliantly dark and addictive Vampire Earth novels and are expecting something similar will be sorely disappointed.

Tale of the Thunderbolt

Choice of the Cat

Way of the Wolf