Dread Nemesis of Mine (Overworld Chronicles #4) 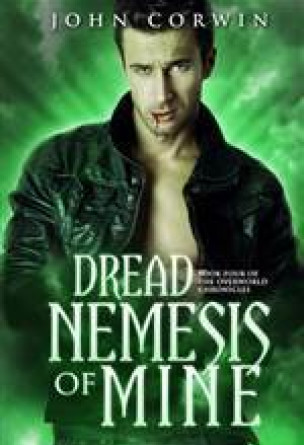 When Justin's long-lost sister, Ivy, shows up at the funeral for Elyssa's brother, Jack, it seems like the family reunion Justin has long hoped for is finally here. But Ivy isn't interested in playing Barbie or hanging out at the mall with her big brother. She's on a mission against evil, and Justin is at the top of her big-bad-meanies list.

Before Ivy can carry through on her threats, Justin finds out that she's been kidnapped. The kidnapper is none other than Maximus, a self-styled rebel leader of his own army of vampires who once kidnapped Justin's father. He also happens to be a world-class douchebag. Despite Ivy's homicidal inclinations toward Justin, loyalty to family leads him to go after Ivy and settle things with Maximus once and for all. Unfortunately, nothing goes to plan, and Maximus's minions capture Justin.

But even as Justin fights to free himself, he discovers Maximus plans to use Justin's incubus blood to fuel his quest for world domination. And the rogue vampire isn't even at the top of the food chain. Far more powerful forces stand behind him: Daelissa the insane angel, Maximus's vampire sire, and, even worse, Justin's grandparents and, quite possibly his own mother.

You're reading Dread Nemesis of Mine (Overworld Chronicles #4) free book online on NovelsToday.com !

Sweet Blood of Mine

Dark Light of Mine

Fallen Angel of Mine

Twisted Sister of Mine

Dearest Mother of Mine

Dearest Mother of Mine

Twisted Sister of Mine

Sweet Blood of Mine

Dark Light of Mine

Fallen Angel of Mine