Embrace Me at Dawn (Doomsday Brethren #5) 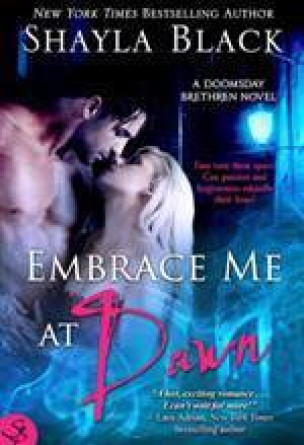 No man will ever define her again.

Anka MacTavish lost everything when Mathias D’Arc captured her, shattered her bond with her mate, and broke both her body and spirit. Determined to heal her bleeding soul, she joins the Doomsday Brethren’s fight to vanquish the evil wizard and seize her revenge. But becoming a magical warrior will require close contact with her former mate, the love who’s never left her heart, Lucan. And she’ll have to explain why she left him and fled to the arms of another lover…

No woman can ever take her place.

Lucan’s world crumbled when Anka escaped Mathias and sought protection from his long-time rival, Shock. Now she has returned, and Lucan must train her to confront a new and terrible danger that threatens magickind. With every punch, blow, and parry, Lucan discovers that Anka isn’t the demure wife he once knew, and his growing desire for this woman is a need he can’t control. He vows to do whatever it takes to reclaim her heart and make her his once more. But when the Doomsday Brethren are forced to make an unlikely alliance, it will test Anka’s resolve like never before. To survive, she and Lucan must rely on one another, face their deepest fears... and expose the dark secrets that threaten to destroy everything, including their love.

You're reading Embrace Me at Dawn (Doomsday Brethren #5) free book online on NovelsToday.com !