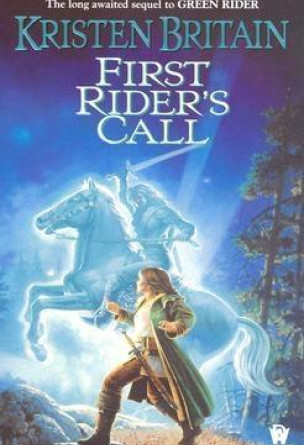 Karigan G'ladheon had been a Green Rider, one of the king of Sacoridia's elite magical messengers. Being a Green Rider was more perilous than Karigan had ever imagined, for a rogue Eletians had cracked the magical D'Yer Wall which had protected Sacoridia for a thousand years from the evil influence of Blackveil Forest--the arboreal prison of Sacoridia's ancient enemy Mornhaven the Black--and had brought the threat of dark magic into the land. In the messenger service she had been caught up in a world of deadly danger, and though she had defeated the Eletian, she had nonetheless been tainted by his wild magic.

Exhausted in body and spirit, and determined to be the mistress of her own destiny, Karigan has returned to her home in Corsa. But Karigan's determination was no match for the Rider's call. Ghostly hoofbeats echoed in the deep regions of her mind, and when she awoke to find herself on horseback halfway to Sacor City--in her nightgown--she finally gave in.

Back at court Karigan found the Green Riders weakened and diminished. Rider magic was becoming unreliable, and she herself was having ghostly visions--visions of a strong woman with wild flowing hair and a blue and green tartan draped across her shoulder, pinned with a golden brooch. This woman was no stranger to Karigan nor would she have been to any Green Rider, for she was Lil Ambriodhe, First Rider, and founder of the Green Rider corps. But why was she appearing to Karigan? And would Karigan be able to seek the help of a woman who had been dead for a thousand years?