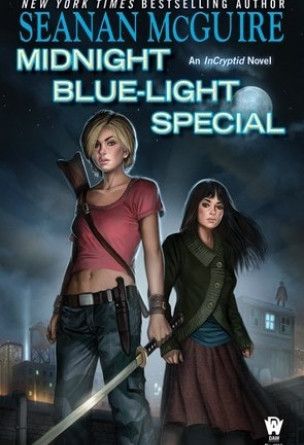 Cryptid, noun:
1. Any creature whose existence has been suggested but not proven scientifically. Term officially coined by cryptozoologist John E. Wall in 1983.
2. That thing that's getting ready to eat your head.
3. See also: "monster."

The Price family has spent generations studying the monsters of the world, working to protect them from humanity--and humanity from them. Enter Verity Price. Despite being trained from birth as a cryptozoologist, she'd rather dance a tango than tangle with a demon, and when her work with the cryptid community took her to Manhattan, she thought she would finally be free to pursue competition-level dance in earnest. It didn't quite work out that way...

But now, with the snake cult that was killing virgins all over Manhattan finally taken care of, Verity is ready to settle down for some serious ballroom dancing—until her on-again, off-again, semi-boyfriend Dominic De Luca, a member of the monster-hunting Covenant of St. George, informs her that the Covenant is on their way to assess the city's readiness for a cryptid purge. With everything and everyone she loves on the line, there's no way Verity can take that lying down.

Alliances will be tested, allies will be questioned, lives will be lost, and the talking mice in Verity's apartment will immortalize everything as holy writ--assuming there's anyone left standing when all is said and done. It's a midnight blue-light special, and the sale of the day is on betrayal, deceit...and carnage.