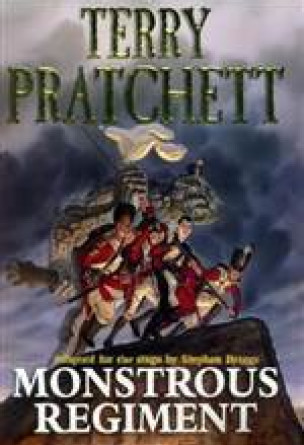 The bulk of Monstrous Regiment takes place in the small, bellicose country of Borogravia, a highly conservative country, whose people live according to the increasingly psychotic decrees of its favored deity, Nuggan. The main feature of his religion is the Abominations; a long, often-updated list of banned things. To put this in perspective, these things include garlic, cats, the smell of beets, people with ginger hair, shirts with six buttons, anyone shorter than three feet (including children and babies), sneezing, rocks, ears, jigsaw puzzles, chocolate, and the colour blue.

The Color of Magic

The Amazing Maurice and His Educated Rodents

A Hat Full of Sky

A Hat Full of Sky

The Amazing Maurice and His Educated Rodents

The Color of Magic