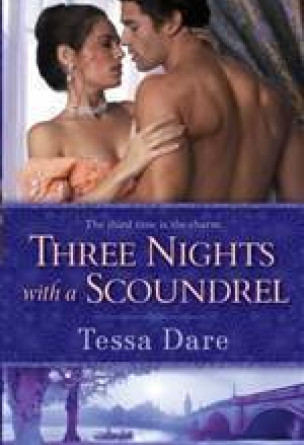 In Tessa Dare’s dazzling new trilogy, the men of the Stud Club live and play by their own rules—until passion changes the game.

The bastard son of a nobleman, Julian Bellamy is now polished to perfection, enthralling the ton with wit and charm while clandestinely plotting to ruin the lords, ravish the ladies, and have the last laugh on a society that once spurned him. But after meeting Leo Chatwick, a decent man and founder of an elite gentlemen’s club, and Lily, Leo’s enchanting sister, Julian reconsiders his wild ways. And when Leo’s tragic murder demands that Julian hunt for justice, he vows to see the woman he secretly loves married to a man of her own class.

Lily, however, has a very different husband in mind.  She’s loved Julian forever, adores the man beneath the rakish façade, and wants to savor the delicious attraction they share—as his wife. His insistence on marrying her off only reinforces her intent to prove that he is the only man for her. Obsessed with catching a killer, Julian sinks back to the gutters of his youth, forcing Lily to reach out with a sweet, reckless passion Julian can’t resist. Can her desire for a scoundrel save them both—or will dangerous secrets threaten more than their tender love?

Beauty and the Blacksmith

Any Duchess Will Do

A Week to Be Wicked

A Lady by Midnight

Once Upon a Winter's Eve

A Night to Surrender

Surrender of a Siren

A Lady of Persuasion

Goddess of the Hunt