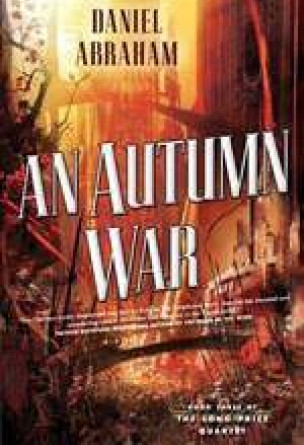 Daniel Abraham delighted fantasy readers with his brilliantly original and engaging first novel, and in his second penned a tragedy as darkly personal and violent as Shakespeare’s King Lear. Now he has written an epic fantasy of much wider scope and appeal that will thrill his fans and enthrall legions of new readers.

Otah Machi, ruler of the city of Machi, has tried for years to prepare his people for a future in which the magical andat, entities that support their commerce and intimidate all foes, can no longer be safely harnessed. But his efforts are too little, too late. The Galts, an expansionist empire from across the sea, have tired of games of political espionage and low-stakes sabotage. Their general, a ruthless veteran, has found a way to do what was thought impossible: neutralize the andat.

As the Galtic army advances, the Poets who control the andat wage their own battle to save their loved-ones and their nation. Failure seems inevitable, but success would end the Galtic threat.

With wonderful storytelling skill, Abraham has wedded the unique magic, high-stakes betrayal and political intrigue of his previous works with a broad tapestry of action in a spectacular fantasy epic.

The Dagger And The Coin #1